Whose Idea Was This, Anyway?

I'm not a runner, not by any stretch of the imagination. Interval style cardio is much better in terms of muscle gain, long term calorie burn (post workout) and enjoyment. Running is straight cardio with the side effects of sore joints, muscle loss and (for me), extreme mental boredom.

Despite all of this and the concern from my personal trainer, I am training to run 10 miles on July 28, 2012. 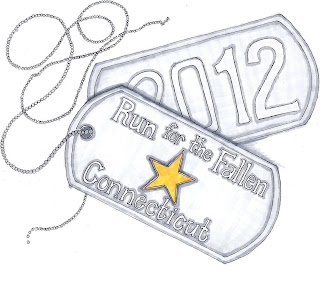 Run for the Fallen CT is an annual event honoring fallen soldiers from Connecticut. In prior years, each mile of the run was dedicated to a soldier lost in the Middle East conflict. Last year, the lead ultra runner Clifford Paquette ran a total of 59 miles. He was accompanied by teams who each ran 10 mile intervals. This year, the runners will complete a 61 kilometer run on July 28, 2012. (That translates to an amazing 40 mile run.)


This is Cliff making his final lap at the Glastonbury High School track where the Run ends. 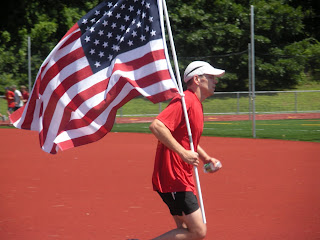 While the ultra runners are on their journey, people gather at the track - families of fallen soldiers, friends and local citizens - to walk or run laps to fundraise.


This year, the Run for the Fallen CT 2012 organizers made a change, allowing lappers to select which military-based charitable organization receives their funds instead of designating the organizations themselves.

I am a member of the Rotary Club of Glastonbury which supports this event by working the concession stand (a fitting assignment since members of the club built the stand itself). I volunteered to work in the stand at the 2011 event, but also spent time taking photos, talking to lappers and learning the stories behind why they did laps and for whom. The stories were very moving. 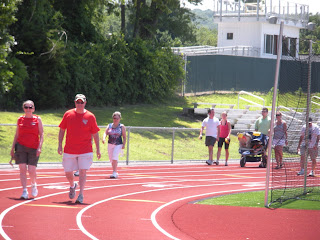 Once the ultra runners arrive, the last lap around the track is completed. 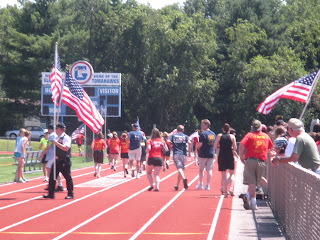 On the field, each fallen service person is represented by a plant with their photo. In a formal ceremony, each soldier is honored and saluted. Both an American flag and an Honor and Remember flag are placed in each plant. 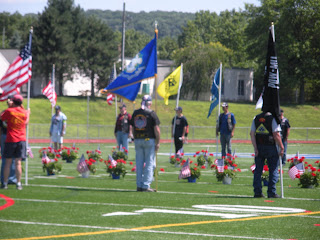 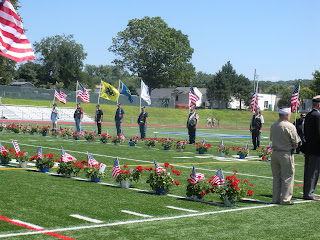 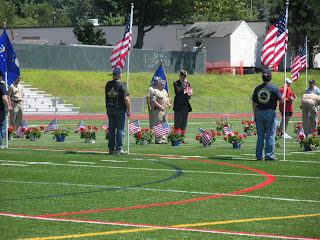 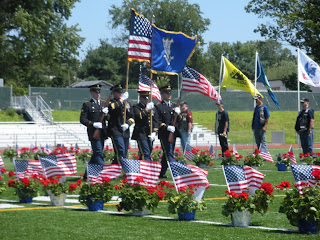 Once I had a chance to process the experience, it occurred to me that no one from my Rotary walked or ran laps. I decided that in 2012, I would complete laps.

In 2012, the Rotary Club of Glastonbury joined forces with Purple Heart Homes of North Carolina, a 501(c)3 organization co-founded by two Purple Heart recipients, John Gallina and Dale Beatty. PHH is a group dedicated to providing accessible housing solutions for wounded service members. To that end, our club took on the task of coordinating the building of a home for wounded Marine CPL Manny Jimenez on Addison Road in Glastonbury. We call the project Manny's Place.

This is a photo of Manny, posing next to plans for his home. This photo was taken by Vicki Thomas, Media Relations with Purple Heart Homes. 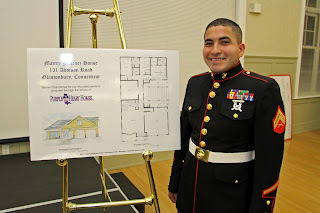 Here's Manny approximately 23 days into construction on his home as framing is about to begin. He's nail gunning prep boards alongside a member of the H.E.A.R.T. 9-11 crew. 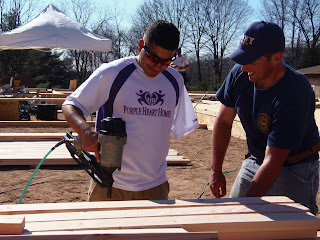 And that's when it happened. I decided that on behalf of the Rotary Club of Glastonbury, I would complete a 10 mile run at the 2012 Run for the Fallen CT event. All donations received are dedicated to Purple Heart Homes to help John and Dale continue their mission of providing accessible housing solutions to wounded veterans around the country.

Here's the problem: I don't run.

I dislike running. It bores me and it's often painful.

When I do run, I am a heel striker - flat-footed with a tendency to pronate and peroneal tendonitis issues in my left leg.

Have I mentioned I have a plate and some screws in my left ankle?

To say this is a Herculean task for me is an understatement. 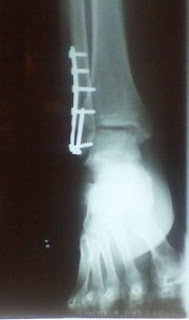 I created a training schedule with distance goals to reach over time. My first day running at the gym was better than I thought it would be. The second session was less so as I started to feel shin pain, nerve-related skin numbness (related to scar tissue in my ankle) and pain in my heel which was the tendonitis rearing its head for the first time since 2010.

Me being me, I immediately thought, "I need new shoes".

I headed over to Fleet Feet in West Hartford to acquire a more supportive running shoe. A super nice guy named Keith helped me out. After making me walk barefoot, observing my gait and measuring my feet, he disappeared into the back room, reappearing with 6 shoe boxes. He handed me a pair of merino wool ankle socks and proceeded to explain to me why he chose each selection, not getting too deep into the technical aspects of the shoe, but giving me enough information that I could follow where he was going.

There were a few pairs which made an immediate impression. I chose those three pairs as the ones in which I would make test runs outside. Each time I took off down the sidewalk, I made mental comparisons.


One pair stood out as perfect for me. All my issues seemed to disappear and I was running on a cloud down Farmington Avenue.

In addition to recommending the perfect running shoe for me, Keith (as an experienced runner), gave me a lot of advice. He meted it out in little bits that I could process and take with me. I left there feeling very supported and I know the team from Fleet Feet is a great resource for running newbies such as myself.

Here are my new Saucony brand running shoes with a pair of socks recommended by Keith. 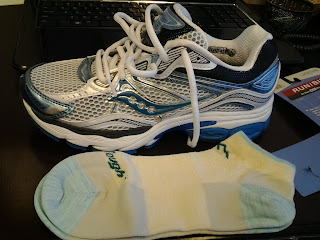 Now that I have a supportive shoe, the run is a mental game for me. I've created playlists on my iPod to keep my mind engaged and my feet moving.

I absolutely hate running, but I know that I have the ability to meet all of my goals. I will complete 10 miles on July 28th (and then immediately return to the joys of non-impact, muscle building interval cardio).


The Purple Heart Homes crew sent me an athlete's shirt to wear on my run. I'm incredibly proud to support this group and look forward to wearing the shirt at the Run for the Fallen CT. 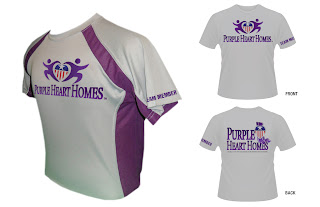 I'm truly proud to live the Rotarian motto of "service above self".

And, when I need a little inspiration to run when scheduled, I think of Manny Jimenez. He just completed the Boston Marathon. He didn't complain about the difficulties created by his injuries nor did he complain about the extreme heat experienced as temperatures soared above 90 degrees. Instead, Manny talked about how wonderful it was to see fabulous views of Boston along his run.


I'm inspired by him to do more and to help others whenever possible.

Whose idea was this anyway? It was my idea, I guess. I wouldn't have it any other way.

I chose 10 miles because it would be hard for me. I could have chosen to run 3 miles or even 1 mile. My supporters wouldn't be less supportive because of it.

I chose the 10  mile distance precisely because I need to work for it.

That will make it mean something to me.


Thank you, Manny for being my inspiration. You never take the easy route. 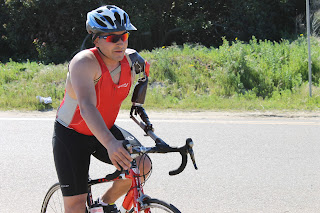 Thank you to my Rotary family for teaching me the Four Way test and providing avenues to live "service above self". 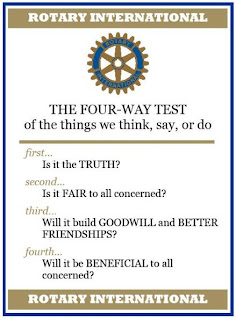 Thank you to John Gallina, Dale Beatty and the amazing staff of Purple Heart Homes.

I'm proud to support you.

(If anyone would like to donate to my run, here is a link to my donation site on Crowdrise. Monies are sent directly to Purple Heart Homes. You do not need an account to donate. Credit card info is not stored and it takes about 30-60 seconds of clicking and typing to get it done. Crowdrise charges a nominal fee for each donation. No donation amount is too small. It all adds up to make a difference in the life of another human being.)

By the way, Manny's Place is coming along. Remember to stop over to the Facebook page and peruse the photo albums which document the construction progress from groundbreaking to the present.

The photos are also a way to thank all the local contractors, tradespeople, Rotarians, and general volunteers who are making this happen with reduced bills, donations of supplies and donations of time. 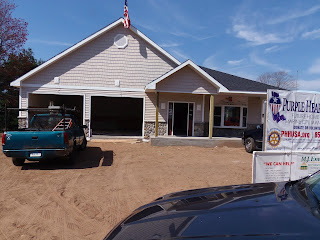 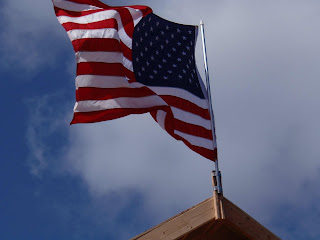 You comments are truly appreciated!

Maria
From size 12/14 to 20W to a 2 - from a wheelchair to an ortho boot to extreme boot camp ready - this blog is my story. I'm still working on myself, setting goals, and doing my best to help others along the way. Thank you for reading and sharing the journey.